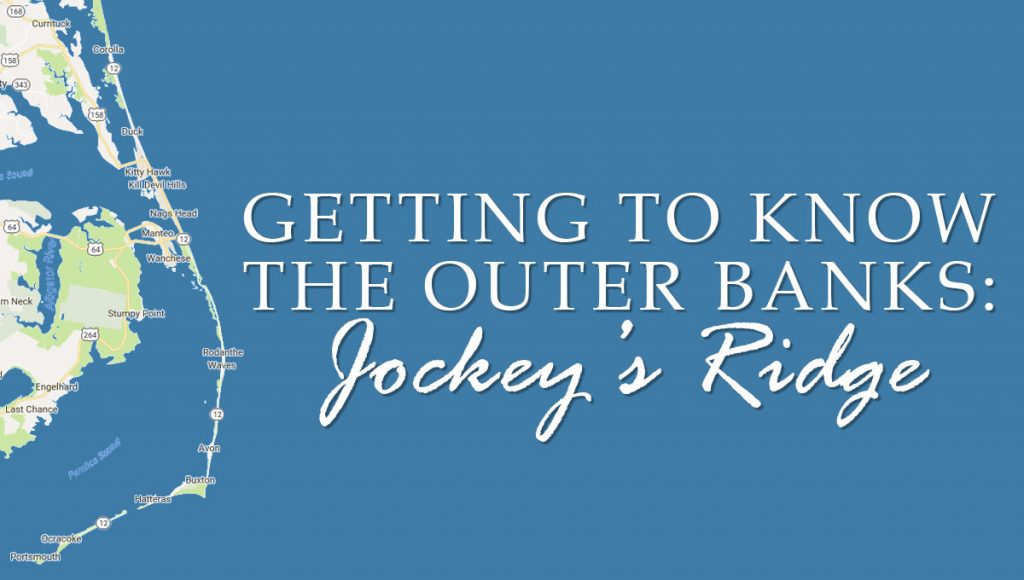 With over 1,000,000 visitors annually, Jockey’s Ridge State Park in Nags Head is one of the most visited parks in the North Carolina State Park system.

A relatively small park—426 acres—it’s appearance is striking with Jockey’s Ridge, a massive 74’ sand dune higher than any other natural feature on the Outer Banks. The park is home to the Kitty Hawk Kites Hang Gliding School, the oldest and largest in the nation. From the slopes of the dune, novice hang glider pilots learn how to soar.

It is an ideal place to learn how to fly what are actually gigantic kites. With nothing to disturb the wind, there is almost always a breeze blowing across the dunes; as landing zones go, sand is a far more forgiving surface than the packed dirt or rock of schools located in mountains.

Jockey’s Ridge may also be one of the finest places in the world to fly a kite. A consistent wind practically guarantees ideal conditions for kite flying, and the view from the top of the dune is spectacular with the Atlantic Ocean to the East and Roanoke Sound to the west.

The park, though, is much more than a huge dune or a place to fly a kite…regardless of size.

Jockey’s Ridge, that massive sand dune is called a medaño. Medaños have a number of similar characteristics; they are high, steep and hold a tremendous volume of sand. Typically vegetation does not grow on its slopes and that is the case here. Jockey’s Ridge is actually the highest of a series of dunes within the park, and because of the interaction of forces of sand, wind, sun and rain, the environment is remarkably complex for such a small area.

A good introduction to how complex the ecosystem of the park is can be seen at the end of the boardwalk that starts at the Visitors Center.

Standing on the observation deck there is a pond immediately in front of visitors. The pond varies in size by season and the amount of rain. Called a vernal pond. the water that is seen is ground water that has been forced to the surface. It is not surface water from rainfall.

That area seems to be in transition right now. Especially during the summer, if there is abundant rainfall—and that was certainly the case in 2017—the pond expands and takes on characteristics of a marsh. Grasses begin growing along its banks and sedges and rushes spring to life in the pond itself. As that first plant life dies off, it stabilizes the soil—which is sand— and provides nutrients as they decay.

If there is enough moisture, those decaying plants provide the environment for woody plants to begin to grow. Looking to the right from the observation deck, on the north end of the pond, there is an excellent example of that. A small but distinctly maritime forest has taken root. Pine trees dominate in that patch of forest; still not completely mature, larger trees—in southern coastal environments, live oak—have not yet become a part of the forest.

To see a mature maritime forest in the park…take a hike.

On the right side of the pond, there is a trail that leads up the dune and to the Roanoke Sound. Sometimes there is a bit of water on the trail, but it’s harmless water. Wade through it. The trail is not very well marked, but once on the other side of the dune, there is almost no vegetation. Keep heading to Roanoke Sound.

Even though it looks like an open field of sand, there are some interesting things to note. The entire dune field is very active, constantly migrating to the south. At one time, some areas were well-protected between two dunes with a vernal pond at the base. The fate of a maritime forest that would form at those sites can be seen in the dead, denuded tops of trees that at one time were thriving but are now covered in sand.

The evidence of that can be seen in a number of places on the Outer Banks—Nags Head Woods, Kitty Hawk Woods or the Currituck Estuarine system.