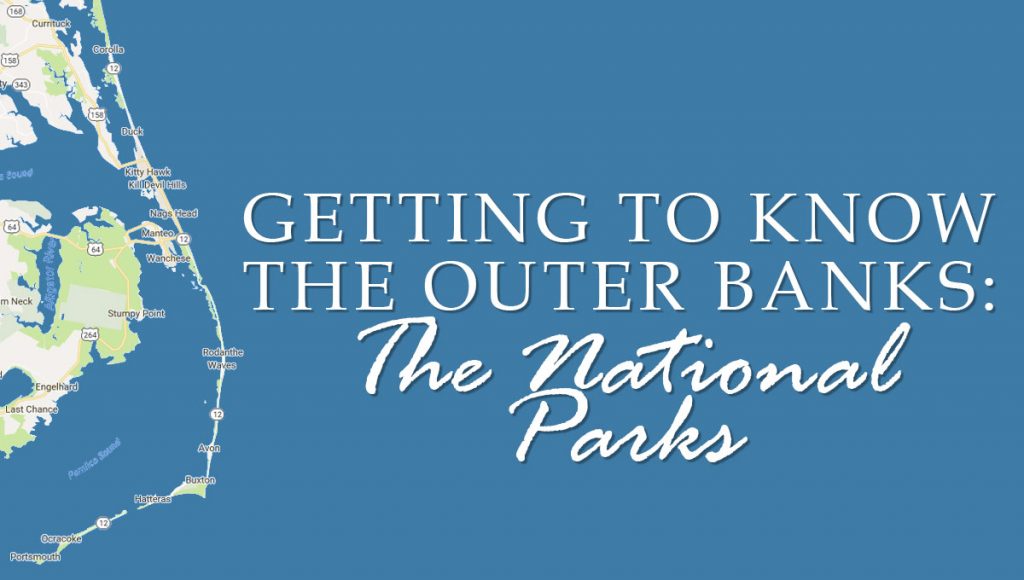 The Outer Banks stretch over 100 miles from Carova at the Virginia/North Carolina border to Ocracoke. There is even an uninhabited island just south of Ocracoke—Portsmouth Island—that could properly be called part of the Outer Banks.

There has certainly been development—the Outer Banks economy is healthy and it’s based on visitation. But an interesting feature is how much open space remains and how much effort has been made to retain that open space and to honor the history of the area. Much of the credit for that has to go to the National Park Service and the outsized role it plays in life on the Outer Banks.

There are three separate National Park areas locally, but they are administered jointly from Roanoke Island by the Outer Banks Group. They are Cape Hatteras National Seashore, the Wright Brothers National Memorial and Fort Raleigh National Historic Site.

Cape Hatteras and the Wright Brothers Memorial are very well known, but all three sites are worth a visit.

Cape Hatteras National Seashore offers so much to do that we can’t list everything, but certainly some of the highlights are worth checking out.

There are a number of beaches that are managed by CHNS, and the Park Service does a great job of protecting the environment.

One of our favorite beaches is Coquina Beach in South Nags Head. The sand is remarkably soft, the beach is wide, there is plenty of parking, and restrooms and showers are well-maintained. There is a bit of a walk across the dunes to get to the beach, but the effort is well spent. A fantastic beach.

Bodie Island Lighthouse and Cape Hatteras Lighthouse are open for climbing, although they do close during the winter. The climb is up a narrow twisting stairwell, and yes in the summer, it gets quite warm. There are height and age restrictions on children, and that is a safety issue. It would not be safe to carry a child on the stairs; if a child is too small or too young to climb on their own, it is best that they do not go.

Although Cape Hatteras gets most of the press, the view from Bodie Island Lighthouse is spectacular and worth the effort. It is a little bit lower than it’s sibling to the south, but getting to the top still takes some muscle power.

There is a wonderful nature trail at the base of the Bodie Island Light. Take a camera for the nature trails and the views.

Off-road driving is permitted at CHNS. A permit is required, and certain areas are placed off-limit from time to time. It is very important to know which areas are restricted and to not drive in those ares. The fines for infractions are significant.

The fishing is great on Cape Hatteras beaches, with The Point at Cape Hatteras offering some of the best action on the East Coast. Best access for most of the prime fishing beaches is with an offload vehicle. Local’s Tip—Fishing at Oregon Inlet at low tide? Watch the tide. High tide covers much of the beach. Also-anyone over 16 will need a North Carolina Coastal Recreational Fishing License

This is where heavier than air flight began, and the National Park Service has done an extraordinary job of telling the story.

A good place to start is with a trek to the top of the Monument. It is a steep climb but putting energy into the climb yields a huge reward. The view is amazing and the opportunities for pictures unlimited. Along the base of the monument the words, “In commemoration of the conquest of the air by the brothers Wilbur and Orville Wright, Conceived by genius and achieved by dauntless resolution and unconquerable faith.” Look carefully at the word “commemoration.” The m and e run together; the story goes that the stone cutters miscalculated how much space would be needed for the quote.

Kids will be fascinated by the walk along the path of the brother’s flight, and if the flight paths seem short, it’s important to remember that before that first 12 second flight no one had ever launched an aircraft with an engine in it, controlled the flight and landed safely.

Also for kids, the interpreter’s discussion of the Wright Brothers and the Wright Flyer in the visitor’s center is outstanding. Adults and children will find it interesting and informative. For the over 12-year-old set—take some time to check out the museum as it  traces Wilbur and Orville’s quest to conquer powered flight. The genius of these American originals really comes to the fore.

Tucked away on the west end of Roanoke Island, Fort Raleigh National Historic Site marks the site of Fort Raleigh, the location of the Lost Colony. There is an easily walked trail behind the visitor’s center that passes by what has been interpreted as the stockade or fort. It’s a pleasant walk and a worthwhile glimpse into one of the great mysteries of history.

Also on the grounds is the Elizabethan Gardens. a marvelous formal garden done in a traditional English style. Waterside Theater, where the play The Lost Colony is performed is also part of the Fort Raleigh site.

The Play is the oldest continually performed outdoor drama in North America. Production runs from late May to mid August. The play’s production values and acting are outstanding and attending should be a part of any visit to the Outer Banks.

The headquarters for the Outer Banks Group is located at Fort Raleigh.