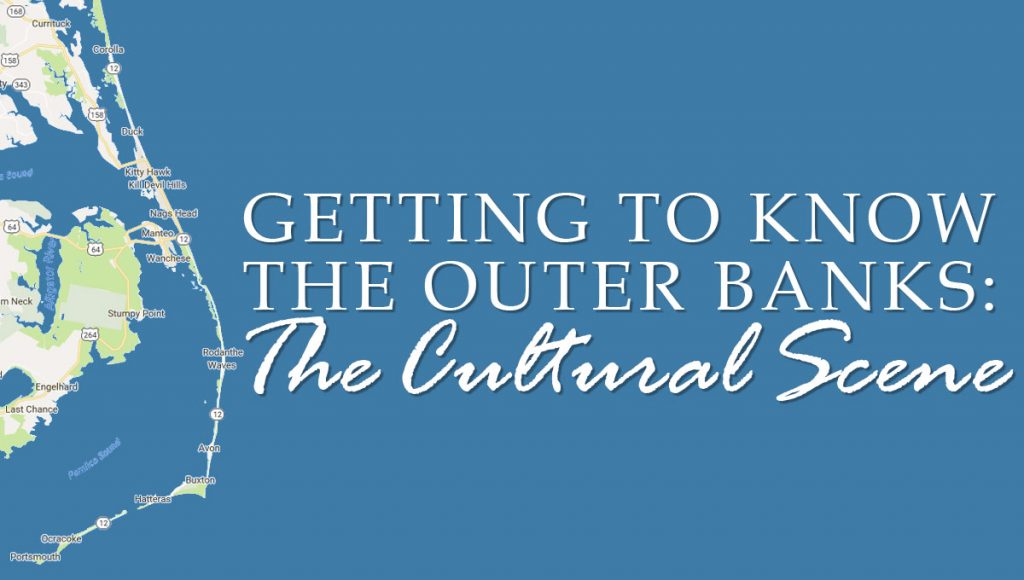 Living on the Outer Banks is an interesting proposition. Just about everyone who lives here owes their livelihood to the four or five million visitors who find there way to this strip of sand every year.

Full time residents love living here—most of us feel as though we have found a small slice of paradise on earth, although it does create an interesting way of life.

In the summer it is just go, go, go. And anyone who wants to work should have no problem finding a job during peak season. A lot of our retirement community take advantage of that, working 12 or 15 weeks over the summer and using that as “mad money” for a special trip or purchase.

In the off season, the Outer Banks has a surprisingly vibrant music and art scene. It’s not as diverse or as large as a major metropolitan city, but for an area with a total population of maybe 40,000 if Corolla and Ocracoke are included, this area does very well.

Our summer visitors may not be aware of how strong that scene is for a simple reason—the groups that sponsor the art shows and concerts are volunteer, nonprofit organizations and the membership is too busy during the summer to put organize those types of events.

After the summer rush, though, things really pick up for the Outer Banks cultural scene. Here’s a list of some of the nonprofit cultural organizations, what they do and how to contact them.

If there is a father of the Outer Banks nonprofits, the DCAC is it. Marking its official birth in 1975, it was the outgrowth of a number of working artists who felt an organization was needed to promote the arts and creativity in Dare County.

The offices and gallery are located in the Old Courthouse in downtown Manteo, and the gallery is worth a visit, with the works of some of the best artists on the Outer Banks on display.

The Gallery has become the focal point of much of the cultural activity of Manteo. A favorite happening in the town is First Friday that runs from April to December—although the December First Friday is the town’s tree lighting…a must see event.

First Friday is a celebration of small town life, with live music, restaurants and bars serving food and drinks at sidewalk cafes and businesses staying open late. In the DCAC Gallery the featured artist for the month is introduced

The DCAC also sponsors Surfalorus, a surf film festival in September and Artrageous—a celebration of kids and the arts—in the fall.

The DCAC is always looking for volunteers and artists. For more information call 252-256-1610 or online at darearts.org.

When First Flight High School was built, the Forum was the first group to understand that the auditorium was better than anything that had been seen on the Outer Banks and as good as any school auditorium anywhere. That is where all of their shows are held.

The Forum generally opens their season with the Richmond Ballet in September and close with the Virginian Symphony Orchestra in late April or early May. In between there is a remarkable diversity of performers. Last year that included April Verch, a Canadian fiddle player and step dancer and AJ Croce, Jim Croce’s son. Both concerts were outstanding.

For ticket information or to join call 252-256-9361 or online outerbanksforum.org.

Don Bryan was a remarkable man. joining the Army Air Corps in 1942, he rose through the ranks, retiring as a full Colonel in the Air Force in 1972, when he moved to the Outer Banks.

He went on to become the mayor of Nags Head, but what he was probably best known for was his artwork. His paintings are wonderfully real depictions of life.

Near the end of his life, he established the The Don and Catharine Bryan Cultural Series to bring a variety of cultural events to the Outer Banks.

Because Don’s mandate was not limited to art or music, what the Cultural Series offers is remarkably diverse. Pulitzer Prize winning author David McCullough has given lectures in conjunction with his book, The Wright Brothers, the New York Gilbert and Sullivan Players have made two trips to the Outer Banks, and working with the state of North Carolina, a traveling art exhibit has been part of the mix.

It is a wonderfully eclectic mix of lectures, music and art and it has helped to create a more vibrant Outer Banks culture.

For more information check them out online: bryanculturalseries.org.