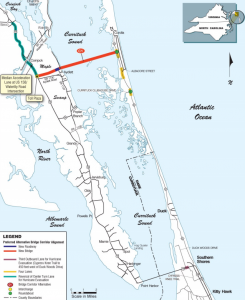 That the Outer Banks is a wonderful place to visit is a given. A beautiful setting, soft sand, ideal for a family vacation and reasonably priced compared to most tourist destinations, it makes sense that so many people choose to come.

If there is a consistent complaint from our visitors  though, it is getting here in the summer, especially on weekends, has become a time-consuming undertaking. As it stands right now, most of our visitors come from the north and arrive on the Outer Banks via the Wright Brothers Memorial Bridge that exits at Kitty Hawk.

About a mile past the bridge there is an intersection that leads north to Southern Shores, Duck and Corolla or south to the main towns of the Outer Banks or Hatteras Island. The intersection is inadequate to handle the volume of summer traffic and consequently, traffic regularly backs up to the mainland.

To alleviate traffic at the intersection a bridge spanning Currituck Sound has been seen as the best solution for a number of year. First envisioned in 1978 as part of a planning exercise for the UNC School of Government, the Mid-Currituck Bridge has had to fight for its life since it first became part of North Carolina Department of Transportation plans.

Current Status of the Project

The Mid-Currituck Bridge is included in current North Carolina Department of Transportation plans; however, the start date has been moved back. As recently as 2016, the construction schedule had the bridge completed in 2022. Although still on the books, it is difficult to know when the bridge is scheduled to be completed.

There is an extensive permitting process that is involved in moving any project like the Mid-Currituck Bridge forward, and the most daunting task had been completed in January of 2012 when a Final Environmental Impact Statement was issued. The next step would have been issuing a Record of Decision, but a change in the political makeup of the state legislature created a change in how North Carolina Department of Transportation evaluated projects and the Record of Decision was never issued.

Because of the delay, the Environmental Impact Statement will have to be re-evaluated and how extensive the re-evaluation process is may determine the schedule.

When the bridge was re-included as part of the state’s transportation improvement plan in 2015, a new schedule of completion of the project was issued that had a date of 2022. That date was contingent on a Record of Decision being issued in the spring of this year.

That did not happen and the new Record of Decision date is spring of 2018.

It is unclear how much of an effect that will have on the overall schedule. Typically contracts are not let until the Record of Decision is issued; it is possible contracts could be awarded more quickly than usual in which case the delay would be minimal.

At this point the North Carolina Department of Transportation website lists the opening date as to be determined.

North Carolina Department of Transportation projections for traffic growth on the Outer Banks point to the necessity of building the bridge. If and when the bridge is finally built, provided the projections are accurate, the impact on traffic will be dramatic.

At this point in time, people living on the southern Currituck mainland repeatedly express frustration with being trapped in their homes on summer weekends. The bridge should remedy that. Additionally traffic that slows to a crawl through Duck and Southern Shores should move mover efficiently.

The Mid-Currituck Bridge, though, enjoys widespread regional support, not just a vote of confidence from Dare and Currituck County officials.

For the counties that makeup Northeastern North Carolina the Mid-Currituck Bridge represents employment opportunities for their residents. Unemployment rates in neighboring counties tend to be higher than the beach communities and with quicker access to Corolla, the belief is jobs would be available.

Employers in the Corolla area would also like to see the bridge completed. Because there are relatively few year round residents in the area, finding employees to fill summer needs has been a consistent problem and like the neighboring county officials, the bridge is seen as a way to relieve employee shortfalls.

If the bridge is built, it’s difficult to predict what the effect on real estate and business will be. The preferred alternative will connect Aydlett with Corolla, landing in the Outer Banks between Timbuck II and the Whalehead Club.

On the Outer Banks side, the impact will probably be minimal; buildout is continuing regardless of what happens with the bridge.

On the Currituck mainland side, it may be a different story.

There is very little commercial development in the area that will be the corridor for the bridge—at this point it’s farmland and swamp. The swamp is Maple Swamp and is protected wetlands, so there will be no building there, but there may be opportunity in the areas that will allow construction.

Will It Be Built?

That is an interesting question.

The short answer is probably but there are some significant hurdles to cross.

There are still question about how the project will be funded. Plans call for a Private Public Partnership, with financing that will be paid for by tolls. The total cost of the project is approximately $500 million, although that may go up if the delays continue.

Questions have been raised asking if the tolls will be adequate to satisfy repayment of the debt and maintain the bridge.

There is almost certainly going to be a lawsuit filed by the Southern Environmental Law Center.

The Southern Environmental Law Center has been on record as opposing the project for some time. They have raised concerns about environmental damage and continuing buildout of the Currituck Banks. The organization has presented an alternative plan that would include flyovers at the troublesome intersection and other road improvements.

The plan is similar, although not identical to, one of the alternatives rejected by North Carolina Department of Transportation.

If the Southern Environmental Law Center does sue to stop the project, they will do so after the Record of Decision is issued, since the project is not officially on the books until that time.