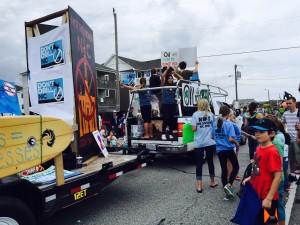 I thought it was a good idea to provide an update since it had been a year since we last mentioned offshore drilling, as it relates to the Outer Banks. But then the exciting news came, after I had started writing this, of the Administration’s reversal in the plan to not include the Atlantic as a leasing option.  The big talk on the Outer Banks was still all about #NotTheAnswer or #NotTheAnswerNC or #KilltheDrill up until March 15.  The local Surfrider Chapter continued to make a lot of noise and was still making national news about saying no to offshore drilling for the Atlantic.  The National Chapter really saw this issue as an important one as it ties directly to Surfrider’s mission and came on board with the Not the Answer campaign.  Their campaign included a surfboard being passed around to local businesses starting in Florida and it moved up the East Coast ending up with over 1,000 signatures to show that they oppose offshore drilling.  That signed surfboard was hand delivered to DC this past February.  Well, it seems that the Obama Administration noticed all the opposition and on March 15 the Department of the Interior and the Bureau of Ocean Energy Management announced a revised proposal for the nation’s Outer Continental Shelf Oil & Gas Leasing Program for 2017-2022 which removed the mid and south Atlantic lease sales.  They elaborated that the removal of these areas makes sense since the revised proposal focuses leases in areas with the highest potential, greatest industry interest and where there is already established infrastructure.

It seems we still my have to convince our current Governor Pat McCrory that the potential negative impacts far out weigh any hope of income or jobs, and that these are the real concerns to his constituents.  After he initially praised the Administration’s proposed plan last year, he then went on to say that the 50 mile buffer in the plan is putting roughly 40% of his State’s offshore energy resources off limits and wanting that buffer reduced to only 30 miles.  He continues to say that drilling will bring jobs and significant revenue to our State.  It appears that the coastal counties in NC, with the exceptions of New Hanover and Carteret, have made it clear that they do not want drilling and that they feel the same way Dare County does: it is not worth the risk.  We have a huge economy that would be at risk if drilling were to commence and even more so if a spill ever occurred.  The coastal tourist industry is a well established source of revenue for the State especially here in Dare, Currituck, and Hyde counties. We cannot risk that industry for drilling.

The local Surfrider Chapter had continued to voice their concerns and stepped it up again in August 2015 when Governor McCrory was in Manteo at the Dare County Arts Council for a fundraiser.  They paired up with a local grassroots organization, LegaSea, and quickly organized a peaceful protest outside of the Council building.  About 70 people, including local students from Manteo High School’s Environmental Action Coalition group were outside the building with signs.  This isn’t the first time LegaSea has had to speak up against drilling off our coast.  They had to do this same thing in 1989 when Mobil was putting together a plan to drill a well off Cape Hatteras.  They managed to get all the way to DC with the support of the governor at that time and other officials to get their voices heard to get Mobil to go away.  Then, more recently, Surfrider had a banner fly over, that said “Oil Drilling is Bad for Busineess. NOTTHEANSWERNC.ORG” during the ground breaking ceremony of the new Bonner Bridge replacement that Governor McCrory spoke at where many other local representatives were also in attendance.  Dare County has been one of the most vocal opponents while McCrory has been one of the most vocal proponents for offshore drilling, so they make their voice known any chance they can.  The local Chapter also had another float in our infamous Kelly’s St Patrick’s Day parade on March 13th that included about 50 locals marching for their Not the Answer campaign again this year.

This battle seems to continue however, since McCrory and the American Petroleum Institute are still speaking out that they feel that the reversal from the Administration was for the far lefts and extremists only. That is simply not the case – it wasn’t just liberals or environmentalists that were speaking out opposing drilling in the Atlantic.  It was also business owners, fisherman, other commercial users and even the military and NASA, that are worried what the oil and gas industry can do when the use of our waters get limited or even worse, what happens when there is a spill.  The Interior Department indicated that it had received more than a million comments during the public comment period.  The opposition was bipartisan with 110 municipalities along the east coast passing resolutions against drilling. The risk is too big and it is not even proven that any additional jobs or revenue would be seen in any of the States along the Atlantic if drilling were allowed off of our coasts.  Well, the Atlantic is safe temporarily but not necessarily forever.  Pay attention if you feel that drilling is just not the answer! 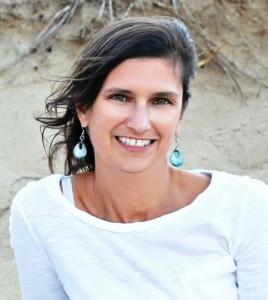