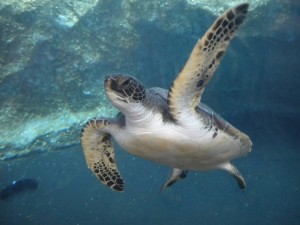 The cold winters eve came quickly the first week of January and caught many off guard as it had been in the high 70’s the week before with warm waters and flip flops in the sand. The tides turned quickly and brought in extremely cold water temperatures which while we can predict and forecast marine life cannot and in turn got caught in the cold.

Over 349 cold stunned green sea turtles were rescued from the Outer Banks coastlines from Hatteras to points north. These turtles were transported by many volunteers and trained staff from area state parks, NEST (Network for Endangered Sea Turtles), OBX SPCA, and the National Park Service. The calls were made and the troops rallied…. They scoured the beaches to collect, tag and eventually transport to their temporary hospital housing at the North Carolina Aquarium on Roanoke Island. Several of the NEST Volunteers brought in more than 200 of these injured turtles on the 6th of January and didn’t have to look far to find them… every time they would tag one they would walk up on another…

Once they were brought to the facility they were separated into three groups (Active, Lethargic, and Shows No Signs of Life). The emergency veterinary team took vitals on all of them including temperature and weight, they were examined for other wounds needing any attention and then they were placed in dry containers (plastic tubs and cardboard boxes) on top of a towel, many of which were donated by the local real estate companies and families from the area, and then placed in temperature controlled settings where their body temperatures were raised very slowly.

After a night of rest and temperature regulation the turtles that responded well were placed in the aquariums “swim tanks” to see if they were capable of swimming vs just floating. The swimming turtles were moved to another holding tank and on January 7th – two days after the cold snap, 85 turtles were deemed strong enough to return to the open water and were shipped to Florida on a US Fish and Wildlife Service truck. The next 120 left on January 11th via a NC Wildlife Resources truck. To date only 9 have been reported to have died from the cold stun event.

The North Carolina Aquarium System has issued an urgent request for donations to help cover the costs of the unpaid and unforeseen expenses for this rescue operation. To assist in this effort please contact Jennifer Gamiel at the aquarium. (252) 475-2307.

If you find a stranded turtle contact the Stranding Hotline at (252) 441-8622. This is a 24hr hotline of certified and trained team members that will care for and remove the turtles as needed.

If you are interested in volunteering for or donating to the local NEST (Network for Endangered Sea Turtles) organization or just finding out more details on them or the turtles please go to their website at www.nestonline.org – they have a wide variety of options for anyone interested in becoming a “team member”.