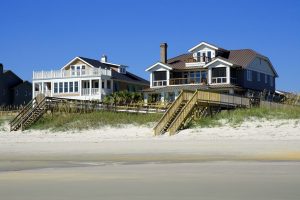 With its beautiful beaches and inviting waters, there are very few places as relaxing, as perfect for a vacation or a weekend getaway, as the Outer Banks. That’s why hundreds of thousands of visitors arrive every week during the summer, and even in the shoulder seasons people still look forward to some time by the sea.

With that popularity, quite a number of our visitors think about moving to the Outer Banks either to work or retire. Many look to build locally, either as a second home or primary residence. Building in an environment as remarkable as the Outer Banks is different from most other locations, and there is some information first time property owners planning to build need to be aware of when they begin their project.

This is general information. There are many reputable and very good builders and contractors on the Outer Banks who can fill in the details.

An acronym for Coastal Area Management Act, the regulations covered by CAMA are administered by the Coastal Resources Commission and enforced by the NC Department of Environmental Quality. CAMA regulations and permits cover any area of environmental concern (AEC) in the 20 coastal counties of North Carolina. An AEC is defined by CAMA as, “…an area of natural importance: It may be easily destroyed by erosion or flooding; or it may have environmental, social, economic or aesthetic values that make it valuable to our state.”

In their literature about permits and regulations, CAMA note that AECs only pertain to about 3% of the land within its jurisdiction. That figure is certainly higher in Dare County and along the Currituck Banks, but it is a valid point that not every construction project on the Outer Banks requires a CAMA permit.

However, for projects that do fall within CAMA guideline, it is imperative that a permit is issued. CAMA enforcement includes work stoppage and fines, and in some cases the fines are assessed daily until the infraction is corrected.

For the most part, CAMA regulations protect wetlands and areas near the shoreline, shorelines that include the ocean and sounds.

▪  in, or on the shore of, navigable waters within the 20 CAMA counties;

▪  within 75 feet of the normal high water line along an estuarine shoreline;

▪  near the ocean beach;

▪  within 30 feet of the normal high water level of areas designated as inland fishing waters by the N.C. Marine Fisheries Commission and the N.C. Wildlife Resources Commission;

▪  near a public water supply;

▪  within 575 feet of Outstanding Resource Waters defined by the Environmental Management Commission.

Outer Banks builders and contractors are aware of the guidelines and should be able to get the necessary permits if required.

On a beautiful summer day with the surf running at 2’ and a gentle southwest breeze, it may be hard to imagine how harsh the environment is on buildings. But it is. The Outer Banks is considered one of the most severe environments for building in the United States.

There is always some salt content in the air and that is exacerbated in the winter when northeast winds dominate and nor’easters track up the coast. There is also almost always moisture in the air. That combination of salt and moisture is very corrosive.

The FEMA guidelines put into perspective what to expect:

“Materials and construction methods in a coastal environment should be resistant to flood and wind damage, wind-driven rain, corrosion, moisture, and decay…”

Wind is certainly a concern on the Outer Banks and all newly constructed buildings must be able to withstand a 120 mph wind.

Almost every home on the Outer Banks is built on pilings, and there are two very good reasons for that. Neither is more important than the other, and in combination, they make a good case for elevating the structure.

Even though the latest FEMA flood zone maps have moved much of the northern Outer Banks into more favorable flood zone designations, the fact is, this is a low lying area susceptible to ocean overwash or soundside flooding during storms. Elevating the structure is the most effective way to stop 6” of water from creeping into a home.

The other reason for building on pilings is two closely related factors.

Inland areas typically have dense soils with a ground water table at least 6’-8’ below the surface and usually more. Neither is the case on the Outer Banks. The soil is sandy and the water table is just below the surface. Basement construction typical of homes inland is not practical with those environmental factors.

In some of the higher elevations, the water table is deeper, but the soil still tends to be sandy.

Except for an area of the central business district of Kill Devil Hills, there are no central sewer systems on the Outer Banks. Waste is handled by septic systems that are part of the homeowner’s property and responsibility.

Because of advances in technology, septic systems have become very efficient, and the effect on new home construction should be minimal if it is even apparent. However, some older smaller lots in Kitty Hawk, Kill Devil Hills and Nags Head could limit the size of a structure.

Remember—septic systems do need to be maintained.

This information is designed to guide but is not definitive. As is always the case, a reputable builder who understands local ordinances and building codes is the key to a successful project.