Do you love HGTV?  Of course you do.  Who doesn’t love watching all the home shows and seeing the new decor trends or what property values are in different parts of the country? Or better yet, you watch to see the big reveal at the end.  Whether it’s a renovation show or a house hunting show there’s always the big reveal at the end.  Have you ever wondered how people end up on those shows and what it is like to film a “reality” TV show?  Here’s my experience of 30 minutes of fame from HGTV’s Beachfront Bargain Hunt on the Outer Banks.

My road to TV fame started back in November of 2015.  It was a typical day at the office.  I was sitting at my desk working away when I was interrupted by the phone ringing.  It was a number I did not know, but it came up as a New York number.  Since we have many people from New York that buy and sell vacation rental or second homes on the Outer Banks I was excited that it could be a call for a new listing or a buyer interested in purchasing.  It was neither.

The phone call was from a production company called Magilla.  They film the show Beachfront Bargain Hunt that airs on HGTV.  They explained that they were going to be filming in my area and wanted to know if I would be interested in filming an episode of the show for them.  I was ecstatic!  They explained  the process and the criteria, and my adventure began.

The Search for the Perfect Client

The search began for the perfect client to film the show with me.  The format of the show follows a couple or family that is looking to buy a beach house on a budget.  A real estate agent shows the buyers several homes and then they reveal their choice at the end.  Normally people apply for this show and are prepared.  From what I understand most people are on the show because either they are the buyer, have bought their home already and submit their story and home to be on the show or a real estate agent applies on behalf of their buyers that are already under contract or have recently purchased. But I was sought out and was taken completely off guard.

I had 2 months to submit my client choice to the production company.  Since this is a show about finding a bargain I was up against some tough criteria.  My buyer had to be under contract or had to have recently purchased their home.  The property had to be waterfront or have a water view.  And the price had to be under $400,000.

If you know a thing or two about Outer Banks Real Estate, you know that to find something waterfront for under $400,000 is not an easy task. At the time I had a handful of buyers I was working with all of which were in the market for homes over $600,000 so clearly they weren’t going to work with the budget restrictions. Every day I hoped the phone would ring and it would be a new client that wanted to buy a home with a water view and their budget was only $400,000.

As my deadline approached I still did not have a buyer that met all the criteria. I felt a little bit of heartbreak over potentially miss out on this great opportunity.

One Great Idea Changed Everything

One day in late January I was driving home from photographing a house in Kill Devil Hills and the idea suddenly hit me.  I called my husband, Andy, right away and told him that I had a great idea for the show.  He was a little hesitant as some of my ideas can be a little out there sometimes, but he patiently listened.  I told him we should do the show. He was confused. I explained that we personally met all the criteria for the show.  He asked me who the real estate agent would be if we were the ones acting as the buyer.  I nicely reminded him that we happened to be real estate agents and we could do the show representing ourselves in buying a new home.

Andy and I lived in Corolla for 9 years and had just recently moved to Kitty Hawk.  Our son, Charlie, was getting ready to start kindergarten and we wanted him to attend Kitty Hawk Elementary School so we made the decision to move from Corolla to Kitty Hawk.  Since we are real estate agents we represented ourselves in purchasing our new home.  And our home fit all the criteria.  It was not waterfront, but we do have a water view.

Andy agreed that we didn’t want to miss out on filming and suggested I talk it over with our casting producer to see what they thought.  Later that day I sent an email to the production company with my idea and they said they would have to get approval from HGTV directly since it did not fit their typical format of having a couple and a real estate agent.  The next day I received an email from the producer saying HGTV loved the idea and wanted to proceed.  Now that the first hurdle was jumped, it was then on to the reality that I was going to film a show for HGTV!!

Fast forward to March of 2016 and it was finally time to film.  I had no idea what to expect.  The production company tried to prep us as much as possible in advance, but it is completely different to actually be there with the crew in person with cameras and lights and fuzzy microphones in my face and people everywhere.  It took 4 days to film our episode.  We did 12-14 hours of filming each day and it was exhausting to say the least.  But what an amazing experience.

We filmed in March, but they wanted us to act as if it were summer.  We had strong winds and cold temps during our 4 days of filming, yet we were in bathing suits on the beach and in shorts and sleeveless tops.  Our teeth were chattering and our bodies were shivering, but somehow we managed to smile through it all and get it done.

Since we had already purchased our home, the portion of the show that has us looking at different homes was more of an example of what we would have done and not actual homes we considered buying.  Before we bought our home we did look at many homes all over Southern Shores, Duck and Kitty Hawk before finally buying the home we did.  So they just recreated the process and we filmed in homes that might have been options we would have considered that all fit the criteria of the show. 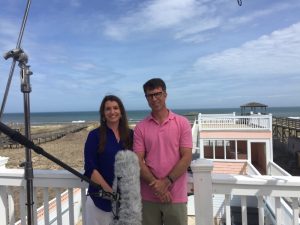 We also decided that filming the show would have been easier if we had a script that we could have memorized.  We would walk into a house and they would film our initial reaction and comments and then they would ask us to it again so they could get a different camera angle.  And, “oh yeah please repeat what you just said.”  We were constantly asking “What did we say?” as it was difficult to remember everything we had just said about what we were seeing.  For each room and house we had to film it at least 2-4 different times so they could get different angles of us and the room.  And that doesn’t count all the times they’d yell “CUT” because something wasn’t right or we said something we weren’t supposed to.

We had certain words or phrases that were banned.  You never realize how often you say a particular word or phrase until you’re told you can’t say it.  My word was nice.  I was not allowed to say the word nice.  I quickly discovered that I really like to say the word nice.  They let a few slide here and there, but we had to start several scenes over.

We spent most of one day doing what they called interview scenes.  It was just the two of us sitting somewhere answering questions that you don’t hear asked when watching.  We went to a few local restaurants (thank you Black Pelican and Blue Point for hosting us!), sat on an oceanfront deck(thanks to a wonderful client that allowed us to film at his home) and had several scenes of us driving in our car.  The field producer would ask us a question.  We would have to repeat the question in our answer and then elaborate.  It was the same process for these interview scenes as it was for the house hunting scenes.  We would go through all the questions, think we were done, and they would say that was great now let’s do it again from another angle.  It was grueling at times, but again, an amazing experience. 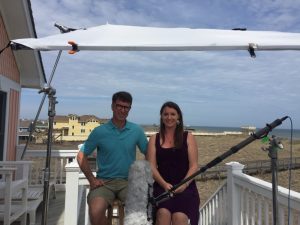 There were several fun scenes that we got to film too.  Charlie got to go hang gliding off Jockey’s Ridge, we went tubing and boating in the sound, we played at the beach (and in the freezing cold ocean!) and we went cruising in our 1968 Mustang convertible to go crabbing and then had a crab feast with steamed blue crabs in the backyard of our new home.

On the fourth day of filming, after a little over 12 hours, we were finally done.  One of the cameramen has been on the production team since the show started several years ago.  He told us he has filmed hundreds of episodes and has never filmed an episode quite like ours before.  In the typical format of the show, while the real estate agent is filming, the buyers have a break. When the buyers are filming then the agent has a break.  Since we were both the agents and the buyers we had to do it all.

When it was all over we were exhausted and excited.  But then the waiting game began.  The production company wasn’t sure when the episode was going to air, but told us it could be 10 to 12 months.  They were right!

Our episode finally aired on HGTV on Sunday January 8th, 2017.  Originally, we were told it would be late January, but they moved our episode up to early January. This gave us very little time to get the word out to our friends, family, and clients.  There will be a second airing of the show in the near future.  If you missed the show in January and would like to be notified of the next airing, please send me an email. I’d be happy to let you know when it airs again.

Have you ever wanted to be on HGTV?  If so, contact me. I have been in talks with a production company to film 4 more episodes.  The criteria is a bit different, but if you are thinking of buying a home in the Outer Banks we would love to be part of your story!